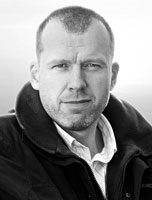 Marcus McAdam has been a professional photographer for over ten years. After spending the first five of those travelling round the world to exotic locations, he decided to settle on the Isle of Skye.

“I’ve seen the world’s most amazing landscapes, from the peaks of Patagonia to the Great Wall of China, and from erupting volcanoes in the South Pacific to paradise beaches in the Maldives, yet for photographic potential, Skye beats them all”. Marcus has lived on the island for eight years now, and prides himself on finding new locations to photograph. “I don’t ignore the classics like Storr and Neist Point, but I prefer photographing locations people haven’t seen before. Even many locals have no idea where many of my photos are taken!”

Marcus has previously worked for the likes of Visit Britain, Panasonic, Microsoft, and the BBC, all of whom recognise him as one of the UK’s leading photographers. He also writes regular features for many photographic magazines, and has been sponsored by Fujifilm, Hasselblad, and Lowepro - three huge brands in the photographic industry.

Marcus now runs photographic workshops on Skye which cater for all levels and abilities. Whether you want to shoot on top of the Cuillin Ridge, or from the window of a parked car by the roadside, Marcus knows all the best locations to ensure you’ll leave with some stunning images. You will also see his postcards, photos, and other merchandise for sale in many of the island’s shops.

Look at our landscape gallery to see more of Marcus's work.