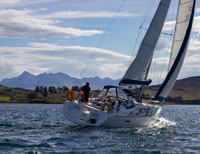 Sailing from Portree offers almost endless opportunities to explore the beaches, tiny islets and anchorages of the east coast of Skye and west coast of Raasay. Here are 5 of the best spots, within easy reach of Portree, with its pontoon with fuel and water, visitor moorings and shops. However, the spots are relatively difficult to reach by land, meaning that you will often have them to yourself.

If you have your own sea kayak then you might well want to explore these spots. However, take extra care in the Sound of Raasay, which can be very rough, especially when northerly winds are blowing.

Please note that this article is a rough guide only, and is not a substitute for charts and other aids to navigation. You should always check the weather forecast before deciding whether to sail, and extra care needs to be taken when deciding where to anchor overnight.

If you do not have a boat or kayak to hand, Sailing Yacht Breeze offers half day trips from Portree Harbour aboard a 40 foot yacht, with a glass of prosecco and a light meal included.

Just across Portree Bay from the town, this is a beautiful but secluded beach. The Gaelic translation means White Bay, and it is flanked by the steep cliffs of Vriskaig Point to the west and a rocky shore to the east. The only sandy beach in Portree Bay, it is easily approached by dinghy as the sand shelves gently. Once on the beach, you normally have only the occasional sheep for company. There are stunning views across to Ben Chracaig, with Raasay and Rona in the distance to the north east, and it is possible to walk barefoot on the fine, volcanic sand.

Less than a nautical mile east of Camas Ban is the mouth of the Scorr Burn. The spot lies between Port a’Chuill, or Back Port, and Camas Garbh, which means Rough Bay. A few hundred feet up the burn, beside a waterfall, is a huge sycamore tree. Under it, you can make out the ruins of the tiny village of Scorr, which was abandoned in the 19th century. Although only 1.2 nautical miles by boat from Portree Harbour, it is a very long walk round by land, meaning the inhabitants were dependent on boats, via a steep access onto an exposed shore. This may explain why the settlement was left to the sheep, which can sometimes be seen on the rocky beach, grazing the kelp.

Across the Sound of Raasay from Scorr Skerry is Inver, where the Royal Yacht Britannia used to anchor while the Queen and royal family picnicked on the rocky beach, away from prying eyes. To the west is Eilean an Inbhire, a tiny islet which is cut off from Raasay at high water. Inver means Estuary in Gaelic, and the burn which feeds the Bay leads up to Storab’s Grave, a prehistoric site. Towering above that is Dun Caan, the distinctive flat-topped mountain which is the highest point on Raasay at 443 metres. Sailing out of the bay and heading a short distance north gives you a view of the famous Old Man of Storr on Skye.

Just over a nautical mile south of Inver, still on Raasay’s west coast, lies Holoman Island. It is particularly popular with sheep from the nearby croft, which cross the rocky causeway at low water and hurry back again before the islet is cut off at high tide. The largest permanent inhabitants are common seals, and there is a large colony on the sheltered south coast. Another frequent visitor is the sea or white-tailed eagle, the largest bird of prey in Britain. You can identify it from its enormous wingspan, which can exceed 2 metres, and the shape of the feathers at the end of its wings, which look like an outstretched hand. Sea eagles are very rare, with just over 100 breeding pairs in Scotland and none in the rest of Britain. They feed on carrion and small mammals on land, but are also excellent fishermen, flying low over the water and taking fish from just below the surface of the sea.

Heading back over to the Skye side of the Sound of Raasay, Braes Beach is just under 3 nautical miles south south west of Holoman Island. Take care to avoid Sgeir Dubh, the Black Skerry, but otherwise the seabed shelves gently. The beach is mainly stony at high water, but there is a wide expanse of silver sand at low tide. The Gaelic name for the bay is Camas a’Mhor-bheoil, the Bay of the Wide Mouth, a name which makes sense when you see it on the chart. The sickle shaped eastern peninsula is well worth exploring, and on its northern tip are the remains of an Iron Age fort or broch called Dunan An Aishidh. It is thought that the fort was D-shaped, and it certainly made the best use of the surrounding cliffs for a strong defensive position.