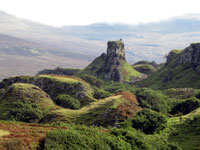 On the West side of Trotternish at Balnacnoc (which means - the village or township in the hills) above Uig, is the Fairy Glen – a Quirang-like landslip in miniature.
The road winds around small round-topped grassy hills with lochans (ponds) in between which gives the glen an otherworldly feel. 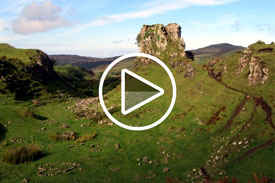 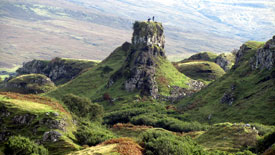 Skye has a long history involving the Fairys, most of which is related to Dunvegan Castle and their ‘Fairy Flag’. The Fairy Glen (much like the Fairy Pools in Glenbrittle) has no real legends or stories involving fairys that can be traced. The simple fact that the location is unusual so it has been given the nickname Fairy Glen.

One of the hills still has its basalt topping intact which, from a distance, looks like a ruin and has been called (inexplicably) Castle Ewan. It is possible to climb to the top where there is not much room, but does have wonderful views. In the low cliff behind Castle Ewan there is a very small cave where it has been said pressing coins into cracks in the rock will bring Good Luck.

In recent years’ visitors have started to move the rocks to create spirals on the ground. We have been told that some of the bus tour guides have made up and encouraged some rituals involving walking the spirals then leaving a coin or token in the centre as an offering to the fairies for good luck.
The locals on Skye have repeatedly removed these stone spirals in an attempt to keep the Glen in its natural state.

We hope that all visitors would respect the country code. To visit & enjoy, but not make adjustments and certainly not leave anything behind, even if you think it may give you good luck.

Parking is very limited in the Glen, it is strongly recommended you park in Uig and walk into the Glen (30min).