A brief outline of Skye’s long and varied history, including Historic Churches, Cleared Villages and Clans.

Skye’s history stretches back to the age of the dinosaurs. Dinosaur’s footprints can be found on the shore at Staffin and there are more dinosaur fossils from Skye on display in the Dinosaur Museum near Staffin. There are also fossils of ammonites, belemnites and gryphaea - devil’s toenails - to be seen on the shores around Skye.

Brochs, those Pictish round towers built around 2000 years ago, are sited all over Skye. They are to be found on Orkney, Shetland and the north and west of Scotland. Some are now a heap of stones while others are fairly well preserved. As we can never really know why they were built it has been suggested that they could be for defence from raiders, as a look out - each broch is within sight of at least one other and most have a view to the sea, or they could be just the equivalent of ‘The Big House’.
The most accessible is Dun Beg at Struan.

Dunvegan Castle is the oldest inhabited castle in Scotland and always by the same family, the chiefs of the Clan MacLeod. The MacLeods are one of the principal clans on Skye. The castle began in the 12th century as a wee thatched house on the rock at Dunvegan. The Lady MacLeod of the time complained to Boswell and Johnston that she could not have a garden on ’this rock’. The castle grew over the years, in at least ten building stages, into its present form.

The MacDonalds, the other main clan on Skye, were not so settled. Round about the 16th or 17th century they moved their clan seat from Dunsgaith, near Tokavaig on Sleat, to Duntulm at the north of the Trotternish peninsula.
The ruins of Duntulm Castle can still be seen perched on the cliff edge. After a baby fell from the castle window onto the rocks below - or so the story goes - they moved a few miles south to Monkstadt House, taking some stones from the castle with them to build an extension. They were still there when Flora MacDonald crossed the Minch with Bonnie Prince Charlie. Leaving the Prince on the shore she went up to Monkstadt House where she found Lady Margaret MacDonald entertaining Government troops. In 1815 they moved south again to Armadale where Lord MacDonald had built a new castle, now the Armadale Castle, Gardens & Museum of the Isles.

The MacKinnons, one of the smaller clans on Skye, occupied Strath and had their family seat at Dun Ringell in Strathaird. In the 15th century they moved to Castle Moil or Dunakyn, as it was sometimes called, at Kyleakin.
Another of the smaller clans is the Nicolsons who had their lands at Scorrybreak just north of Portree. They didn’t have a castle but the ruins of the chief’s house can be seen at Torvaig. The last chief, Norman Nicolson, emigrated to Tasmania in the early 1800s. 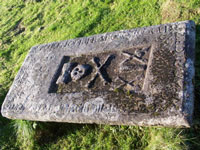 On an island in the river at Skeabost are the ruins on the old church of St Columba’s.
This was the cathedral church of the Bishops of the Isles before that honour was transferred to the island of Iona.
Other old churches with interesting grave stones are - Trumpan in Waternish, where Lady Grange was buried, Dunvegan and Kilchrist in Strath.

All over Skye there are the ruins of abandoned houses. Some on higher ground were probably sheilings where the women and children stayed in the summers with the cattle. This system kept the cattle off the arable ground while the men attended to the harvest. Others were simply the result of what we would now a days call upgrading. But there are whole villages of ruined houses. Some were left voluntarily because they had become inconvenient - too far from transport or schools.

Others were forcibly cleared by the landlord or factor to make way for the more profitable sheep. The villagers were moved to the shore where they were expected to go fishing, or squeezed into another township, or put on ships to North America or Australia. The best known of these deserted villages are Suishnish and Boreraig in Strath where the evictions of 1852 were witnessed by the geologist, Archibald Geekie.