The MacLeods of Dunvegan

Fighting, feast and famine have shaped the lives and fortunes of one of Skye’s best-known families. 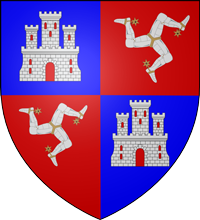 The history of the MacLeods of Dunvegan can be traced back to a 13th century ancestor called Leòd (meaning “ugly” in old Norse) who, until recently, was traditionally believed to have descended from the Norse King Olav the Black, ruler of the Isle of Man and the Hebrides. Recent claims, however, attest that Leod was not the younger son of Olaf the Black but a distant cousin of Magnus, King of Mann, from a female bloodline.

Whichever is the true claim, Leod nevertheless was a Norseman and his two descendants, Tormod (Norman) and Torcal (Torquill), were founding fathers of the two existing clan branches. They are, respectively: the MacLeods of Dunvegan, Harris and Glenelg (Sìol Thormoid) whose chief is MacLeod of MacLeod, based at Dunvegan; and the MacLeods of Lewis (Sìol Thorcaill) whose chief is MacLeod of Lewes, but whose lands and titles were lost to the MacKenzies in the 17th century. 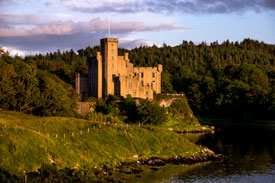 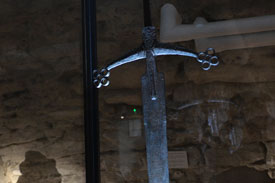 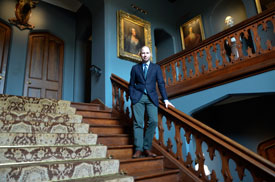 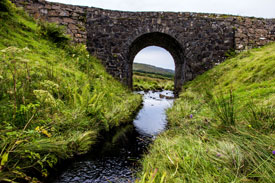 Iain Ciar MacLeod, 4th chief
Iain Ciar and his wife were a particularly infamous couple. He was described as a “tyrannical and bloodthirsty despot” who was not only hated by his enemy but also his own clansmen. His wife apparently had her two daughters buried alive in the castle dungeons for trying to escape the clan.

Alasdair Crotach, Alexander the Humpbacked, 8th chief
“The Crotach” is lauded as the MacLeods’ greatest chief. Said to have been mutilated by a strike with a MacDonald battle axe during the Battle of Bloody Bay off Mull, this belligerent warlord who was feared by many had an aesthetic side to his nature. He embraced culture: he positively encouraged dancing, poetry and music. He formed a piping college on Skye and installed the MacCrimmons as pipers to the MacLeod chiefs, a relationship that still lasts today. He built the castle’s Fairy Tower and entertained King James V to a mountain feast on Healabhal Beag, one of the MacLeod’s tables overlooking Orbost. ‘The Crotach’ spent the latter part of his final years living as a monk on Harris and died there in 1547.

Norman MacLeod 23rd chief
In 1739, Norman MacLeod of Dunvegan and Sir Alexander MadDonald of Sleat and others were accused of being involved in the kidnapping of 96 of their kinsmen, men, women and children with a view to selling them into slavery at £3 per head. The plot was led by Waternish tacksman Sir Norman Macleod of Berneray who managed to herd his victims onto a ship bound for the Americas. A storm wrecked the vessel off the coast of Northern Ireland and the reluctant passengers were all rescued.

John MacLeod of MacLeod, 29th chief
In 2000, John MacLeod attempted to sell-off the Black Cuillin for £10million in order, he said, to restore the dilapidated roof of Dunvegan Castle. At the same time, he also put forward plans to build a 60-80 bedroom hotel and leisure complex near the village. The intended sale of Scotland’s most iconic mountain range caused public outrage and fuelled a heated debate about Scotland’s ownership. When the plans fell through and the Cuillin taken off the market, MacLeod was forced back to the table for funding ideas. A subsequent bid to the National Lottery for £25 million with a promise to hand over the Cuillin and Dunvegan Castle to the public also failed. Further controversy followed his death in 2007 when he left £15million in his will.

Spoiling for a Fight

Until the Lordship of the Isles was forfeited to King James IV of Scotland in 1493, both MacLeod branches were loyal to MacDonald Lord of the Isles, and kinsmen from both families fought side-by-side at the Battle of Bannockburn in 1314 for the Bruce cause; the Battle of Harlaw (1411) for the Chief of Clan Donald; and at the Battle of Bloody Bay in 1481 for John of Islay. After the loss of the Lord of the Isles’ title and lands, however, Scotland fell into a period of crisis and anarchy and the two major family branches — the MacLeods of Dunvegan and MacDonalds of Sleat — became locked in a violent feud that would last for over a century.

The enmity was bitter, the fighting barbaric, and both clans committed terrible atrocities towards each other’s kinsmen in a bid to regain and extend their powers over the Island. The fighting laid waste to farmland and the collateral damage to communities was high with reports of the civilian population being reduced to eating horses, pets “and other filthie beasts".

In addition to the battle sites during the Wars of the One-Eyed Woman (see section on MacDonalds of Sleat), there are many places on Skye which mark the historical hostilities between these two vying clans. One such place is Trumpan Church, now a ruin, on the Waternish Peninsula.

In 1577, after a MacLeod raiding party landed on Eigg, the island’s population of MacDonalds fled to a cave in the south of the island. With a view to flushing them out, the MacLeods blocked the cave entrance with heather and vegetation and set it alight. Instead of becoming prisoners, however, all 395 MacDonalds were suffocated to death. Enraged by the slaughter, the following year, the MacDonalds of neighbouring Uist landed eight birlinn war galleys at Ardmore Bay. While the MacLeods were all gathered inside nearby Trumpan church for their Sunday worship, the marauding MacDonalds barred the doors and set alight to the church, killing all but one – a young girl. The girl apparently managed to escape through a window, run the 10 miles to Dunvegan Castle and raise the alarm. Unfortunately for the MacDonald party, a low tide had grounded their escape vessels, leaving time for the MacLeods to catch them. A battle ensued, during which MacLeod raised the fairy flag and slaughtered his enemies to every man. The bodies of the fallen MacDonalds were lined up behind a turf dyke which was collapsed over the top of them. This bloody moment in history is widely known as the Battle of the Spoiling Dyke.

These are how the stories go and historians have cast doubt on their historical accuracy. It is true that so violent was the feud it claimed many lives on both sides and in the end the king himself intervened and forced the two fighting families into a treaty of peace.

It was not only their neighbours the MacLeods picked a fight with. Internal disputes too often ended in bloodshed. During the ’45 Jacobite Uprising, Clan MacLeod’s main branch supported the British Government. Clan MacLeod of Raasay, however, were strong Jacobite sympathisers who fought for the House of Stuart at the Battle of Culloden and helped to hide and transport the exiled Prince to safety. The repercussions were swift and ferocious and, after the Culloden defeat, Raasay was pillaged and burned, not only by the Royal Navy’s “cruel” Captain John Fergusson, but the island’s inhabitants were allegedly harried by the MacLeods (under chief Norman “the Wicked Man”) who is said to have embarked on daily sprees of violence.

Visitors to Skye’s popular hotspots will notice there are a fair amount of sites around the Island attributed to the supernatural. One legend says the Old Man of Storr is the petrified remains of an unfortunate man and his wife who, whilst being chased by a band of giants down the mountain, took a glance backwards at their pursuers and were turned to stone. Another explanation says this natural obelisk was chiselled by a brownie whose mortal friend had died of a broken heart after the death of his wife. The remote Loch Coruisk, at the foot of the Black Cuillin, is said to be the home of the kelpies, while legend has it the Cuillin range was sculpted by a violent sword battle between two giants. Some believe the magical Fairy Pools near Glen Brittle and the Fairy Glen near Uig get their names from “the little people” who dwell there.

Am Bratach Sith, the Fairy Flag of Dunvegan, is possibly Skye’s most famous symbol of myth and magic. The silk flag, which is on display at Dunvegan Castle and dates back to the 4th Century AD, is the MacLeods’ most treasured relic. A common legend associated with the flag involves a MacLeod chieftain who fell in love with a fairy princess. Her worried father, the king of the fairies, eventually succumbed to her pleas to marry the young man. The king granted her the wish on the condition that, after a year and a day, she would return to the fairy realm forever.

A year and a day passed and the fairy princess, who was now a mother, made her grieving husband promise to look after their son and never allow him to cry. They parted at the castle’s Fairy Bridge, never to meet again. Months later, during a feast, the nursemaid in charge of the boy left his room to observe the festivities. Alone in his cot, the child began to cry and, when the nursemaid returned, she witnessed a beautiful young woman wrapping the infant in a cloth and singing softly to him before disappearing.

When the boy grew up, he remembered his mother’s visit and repeated her words to his father: that the talisman cloth could be unfurled three times and used as an advantage during times of danger.

The Fairy Flag was successfully raised during the Battle of the Spoiling Dyke against the MacDonalds and during a devastating cattle plague. It has yet to be used a third time.

On top of a basalt outcrop on the shores of Loch Dunvegan stands one of northern Scotland’s oldest occupied castles. Home to 30 generations of MacLeods, spanning over 800 years, Dunvegan Castle has endured centuries of building, demolition and rebuilding which has forged its rich architectural history.

After James VI’s Statute of Iona in 1609, Highland warlords were compelled to contribute to agricultural productivity. Drink and feasting was restricted and imports cut. Lavish spending, building costs, famine and political ambition resulted in debt and, over the years, forced the MacLeod chieftains from their ancestral seat to seek a more provident fortune across the globe. The castle is partially inhabited by the current clan chief, Hugh Magnus MacLeod, who is based in London.

After centuries of war and social, political and economic change, the Clan MacLeod Society was formed in 1891. A few decades later, kinsmen finally began to return home under the gentle persuasion of Chief Dame Flora who encouraged her clansfolk to embrace their ancestral lineage. This culminated in the first MacLeod Parliament in 1956. Clan gatherings have been held at Dunvegan ever since and family members from across the Globe descend to the castle every four years to celebrate their history and family bonds. The next Clan Gathering (the 18th Parliament) takes place between 21 to 28 July 2018.

The Dunvegan Estate lies across 42,000 acres with the family seat at Dunvegan Castle in the north west of Skye. Several Special Areas of Conservation and Sites of Special Scientific Interest lie across the land, including the Black Cuillin mountains and the head of Loch Dunvegan. MacLeod lands also include the Fairy Pools near Glenbrittle and the MacLeod Tables. The Estate also has close historical links with the island of St Kilda.

The castle and grounds are open to the public from Easter to October and the current custodian is Jeroen Roskam (pictured above). Visitors to the castle will witness an historical journey through MacLeod history and an impressive collection of art and artefacts associated with one of Scotland’s most enduring family lines.

Crest
A bull’s head cabossed sable, horned Or, between two flags gules, staved at the first