For an archaeologist a walk anywhere on Skye is a journey into the past. From the first appearance of humans in the area circa 14000 BC to the clearances of the late 18th and 19th centuries the evidence of human occupation and use of the land lies exposed across the landscape. 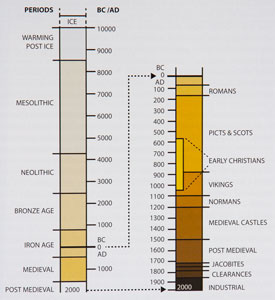 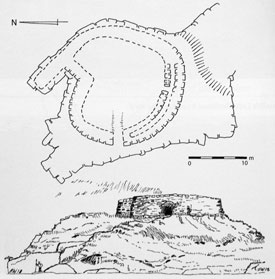 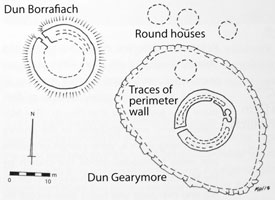 The first people to spend time here, circa 14000 BC, were small groups of Late Upper Palaeolithic hunters who walked across Doggerland, what we now know as the North Sea, following seasonal summer migrations of elk and deer. These little known, and even less understood, people left scatters of stone tools in the north of Skye - evidence of small hunting camps – before the ice returned circa 11000 BC and Skye once again became a tundra like landscape inhospitable to both humans and animals.

Once the environment returned to warmer and more hospitable conditions and the ice withdrew northwards, circa 9000 BC, people slowly returned to Skye. Mesolithic hunter-gatherers (8000–4000 BC) eventually travelled throughout the islands of the west coast on a seasonal round in pursuit of food and tool resources. A site excavated at Kinloch on Rum and only a day’s boat journey away to the south-west may be the winter base for one of these wandering groups.

Later, during the Neolithic period (4000–2300 BC), chambered tombs were constructed across Skye – all that survives of a people who arrived on the west coast after sailing the western seaboard of Britain from the continent. These peoples introduced agriculture and animal husbandry to Skye, the basis of a settled way of life which was to continue from this time on.

Around 2500 BC the working of metals developed, first copper, quickly followed by bronze (a blend of copper and tin) and then circa 800 BC the smelting and forging of iron. Throughout this time, until at least the Iron Age, the inhabitants of Skye appear to have farmed the landscape, built round-houses and lived peacefully. With the development of iron, however, fortified sites begin to appear (known locally as brochs and duns) and it is possible that population pressure/land hunger began to disrupt this settled way of life.

The emergence of early medieval kingdoms and the spread of Christianity in the early centuries AD sees the west coast emerge from prehistory into the historic period. The first millennium AD was a time of upheaval with different groups such as Picts, Gaels and Scots and eventually the Vikings appearing on the scene. Around this time clans developed, people lived in small communities, (Clachans), grew oats and barley and traded up and down the coast. Transhumance, a way of farming where animals were taken up into the hills for summer grazing, was practiced and small ruined buildings known as shielings can be found all over upland Skye. From this point on, first townships followed by individual crofts allied to large communal ‘grazings’ appear. A way of life which still exists in many places today.

Local expert Martin Wildgoose has written this short overview of the Archaeology of Skye.
More information can be found in his book which was co-written by Karen Hardy.

The book Travelling Through Time is stocked in our online Skye Shop.