The Isle of Skye is a great destination for wildlife watchers. Listed below are some of the more notable species to be seen while visiting the island. Many of them can be seen by taking a boat trip. If you’re keen to see as much as possible during your stay it would be worth joining a wildlife tour. 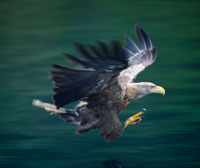 The white-tailed eagle commonly known as the ‘Sea Eagle’ is the largest bird of prey in Britain and is mainly found on the west coast of Scotland.

The cliffs around Skye being widely known as the best place to see these large birds in the wild. In particular, the cliffs near Portree offer some the most reliable sightings. The crews of local tour boats regularly throw fish into the water to tempt down these awesome birds, allowing wildlife watchers to get a great show.
The adult Sea Eagle has a wing span of 8 foot and eats fish, rabbits and other small birds. The species went extinct due to persecution by farmers and game keepers. In 1975 the Sea Eagles were reintroduced to the Isle of Rum (just south of Skye) from Norway. Since then the Eagles have gone from strength to strength now with hundreds of birds around the west coast of Scotland. A true success story. 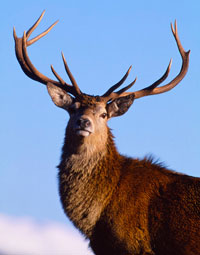 Red Deer are the largest land mammal in the UK and are mainly found in Scotland, with the largest population in the west coast Highlands and Skye.
In the summer months Red Deer will be on the higher ground grazing and have a dark red/brown coat (hence their name). In the winter there coat turns darker and slightly grey in colour.
The Stags each year grow their iconic antlers ready for the ‘Rut’ in late autumn. This is where these large males do battle for the attention of the females.
In the winter months Red Deer come down to the lower ground in search of better grazing and this is when you will have the best chance of a sighting.

Otters can be seen all round Skye and the UK and will be found on the coast or in rivers and lochs. The species that is found in Scotland is the European Otter (Lutra lutra) part of the weasel family, which grow to a size of 3 foot in length. They eat a huge variety of things such as small fish and frogs.
To see an otters in the wild on the shores of Skye you simply need patience. Sit quietly watching a rugged bit of coast and there is a good change an Otter will swim by. Kayaking is also a great way to watch otters playing in the shallows. 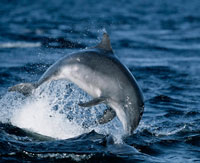 There is nothing more magical then seeing Dolphins in the wild. In the water around Skye a pod of dolphins can be a common sight to see. There are a few different species that visit our waters, but the most regular are the ‘Bottle Nosed’ and the ‘Common’.
If you happen to be in the right boat in the right bay during the summer you can witness a ‘Super Pod’ where hundreds, if not thousands of dolphins group together. A spectacular site! No one can be sure why these super pods are formed, maybe chasing a huge shoal of fish or for social reasons.

The most common species of whale that can be seen in the waters around Skye and the west coast of Scotland is the Minke Whale. Which can be seen from May to October.
They are most likely to seen from a boat (see boat trips). Other location to spot whales include Rubha Hunish (the most northerly point of Skye), Waternish Point and by the Neist Point Lighthouse in Glendale.
Rarer species of whales that visit Skye’s waters include the Humpback, Killer (Orca), Sei, Sperm, Fin, Northern Bottlenose, and Long-Finned Pilot whales – truly rich waters!

In the Sea lochs and bays around Skye there are 2 types of Seal the ‘Common’ (which is sometime known as the Harbour Seal) and the ‘Grey Seal’. The Common Seal grows up to 6 foot in length, the Grey Seal tend to be bigger with and adult male reaching up to 11 foot long.
The best way to see seal in the wild are by taking a boat trip. As the seals do get used to those same tour boats coming around for a look all summer, you will get surprisingly close in the tour boat allowing you to take photos of the that classic sun bathing Seal.
There are some places where you can see the colony’s from land such as the small Islands near Dunvegan Castle.

Skye does have a few salmon rivers with the largest being the River Snizort, which meets the sea at Skeabost.
By the late 80’s the west coast salmon population had crashed due to over fishing both while at sea and in the river.
Under careful managment and a successful restocking program many of the larger rivers are now starting to improve with returning fish. Most anglers now work a catch and return policy. If you are a keen angler there are local guides who take visitors to those perfect spots. Fishing by fly is the accepted method. 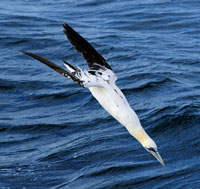 The Gannet is the largest sea bird in Scotland with an adult bird having a wing span of up to 6 foot. Gannets are famous for the way they catch fish. When they spot a shoal of fish from the air they tuck their wings back and dive into the water at high speed. This is very dramatic to watch.
Gannet as best watched from a boat or cliff top and can be seen around Skye from mid to late summer. The largest colony of Gannets in the world is on the offshore islands of St Kilda, there is a fast boat from Skye – see Go to St Kilda.

A Golden Eagle is near the top of any bird watchers list. The Isle of Skye is a great place to see them in the wild. With a wing span of up to 8 foot they are one of the largest birds of prey in Briton. Their diet includes mice, rabbits, and annoyingly for the local farmers, as they have been known to take whole lambs!

Golden Eagles nest in cliffs, so getting a good view can be a challenge. Use the services of a local Skye wildlife guide to help you find this huge bird of prey.

The Puffin is a small sea bird that is made famous by it’s brightly coloured parrot-like bill. They are a diving bird and an impressive swimmer, highly maneuverable underwater when hunting fish.
Puffins are not easily to see around Skye, normally most visible early spring (March – April). Boat trips (such as AquaXplore) that head out from the south of Skye to the neighbouring Islands, such as the Isle of Canna where Puffins nest offer the most reliable sightings. 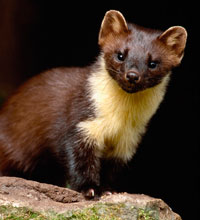 The rare Pine Marten is a member of the weasel family and is about the size of a domestic cat. They are mainly active at night, preferring a woodland environment. They eat mice, frogs and small birds.
It is believed they have only recently arrived on Skye, with the opening of the Skye Bridge. They made it across the the bridge and can now be found in the south of the Island around Kyleakin and Sleat.