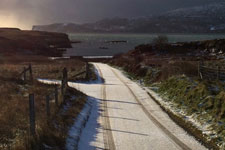 Sharing images of Skye’s natural winter beauty, Susie’s blog features an account of a writing and photography project begun in the depth of winter as an antidote to the short days and low light. As the rest of the country grinds to a standstill under snow drifts and freezing rain, these images reflect the coming of Spring after the icy blast.

It feels like it’s been a long winter but beautiful too, with frequent clear skies and sunshine, despite the chill. Plenty of low sun and sideways light on the lochs and mountains is so typical of a Highland winter and is potent inspiration for words and pictures. I’ve been out and about the island collecting images and ideas for writing projects.

It’s the same every year, by the time February arrives, I’m on lookout for clues to the end of winter and this year with the frost and snow, they were a long time coming! These beautiful crocus are just about up in my garden!

As an antidote to work and the effects of the darker days, I’ve been out on the walking trails over the winter months and found myself north and south in all conditions, waiting for weather-windows to make pictures, getting doused by the squalls, being out among the winter wildlife that eeks out an existence on the berries, the buzzards hunched on the boundary posts and the hardy sheep and cattle on the grazings that traverse many of the paths. This was taken along one of my favourite short rambles up in the north west of Skye.

A typical day of exploring the less well-worn trails to photograph and write about involves an early start to make the most of the light. Preparing the daypack; cameras, notebook, maps or guides, extra layers and spare socks and shoes to change into! A flask, as well as a water bottle, running shoes in case there’s an opportunity to stretch a lung out there before heading home and finally some pennies for a coffee afterwards. I took this image down on the sand at the Point of Sleat before for heading back for a welcome warm up and a coffee.

Rounding off each trip with a visit to one of Skye & Lochalshs’ great cafes became a bit of a ritual and I’m looking forward to finding more of them in the coming months. One spectacular cold day I took this from deep down in Loch Hourn, looking back to the Cuillins.

Looking ahead to the beginning of another healthy season for Skye and the Highlands, to Spring as it unfolds and to sharing some of the less well-known routes with explorers via the website as it evolves. I discovered this amazing lichen on rocks like cave paintings along the Skye Marble Line trail out of Broadford.

Feeling optimistic that as awareness of some of the more sensitive environmental issues grows, the more vulnerable sites around the island are in safer hands than before, with plans developing to help further protect them into the future.