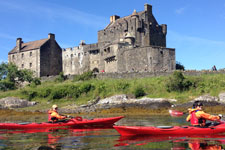 The Isle of Skye is the largest and best-known offshore island in the UK, with its mountains and sea combining to create breath-taking scenery. Lochalsh, its nearest geographical neighbour, provides ease of access but sits in the shadow of Skye, in terms of both reputation and weather! The latter results in a relatively drier climate in the western part of the Lochalsh peninsula.

Lochalsh, however, is a region that is a special place in its own right, as it too consists of mountains, stunning coastline and picturesque villages and it functions as an important hub connecting the traveller and sea kayaker to some of the most outstanding areas of natural beauty in Scotland. This is a region connected historically, culturally, politically and geographically by the sea. The coastline is intricate, studded by islands, home to communities and is rich in wildlife. Panoramic views are the norm and the options are many and varied for paddling.

Although firmly part of mainland Britain, Lochalsh, like Skye, also has the characteristics of an island. In former times this peninsula parish could only be reached by boat across Loch Carron in the north and via Loch Long and Loch Duich in the south-east. Nowadays you can still arrive by boat, but there are also 3 more options: By road using the A87; By train, using the rail link from Inverness to Kyle of Lochalsh, which is considered to be one of the most scenic railway journeys in the UK; and even by air – the small airstrip in Plockton provides a spectacular landing for light aircraft into this famous and beautiful Highland village. 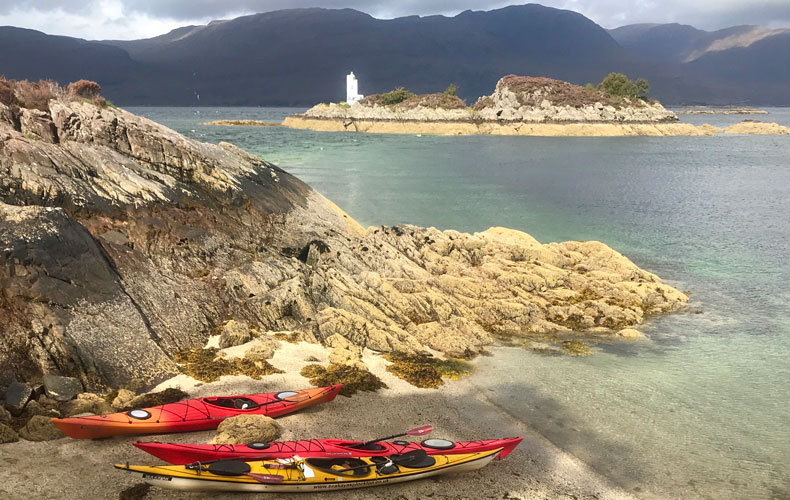 The waters of Loch Alsh, the strip of sea that separates Skye from the mainland, offers the kayaker the opportunity to paddle “over the sea to Skye”. Romantic Skye-bound paddlers can hum the “speed bonnie boat . . .” tune to the audience of resident seals. The shores of Loch Alsh offer the sea kayaker variety: modern and ancient history, shipwrecks, the former dwelling of the ‘leopard man’, the hustle and bustle of a busy port, as well as ubiquitous scenery and views. Given the strong tides close to the Skye Bridges there’s always the potential for some rough water to be added into the mix. The latter, combined with coffee shop preference, will influence planning for any kayaking day out in this location.

At the eastern reaches of Loch Alsh, the iconic Eilean Donan Castle sits majestically on its vantage point, a small island at the confluence of 3 sea lochs. At this junction, Loch Long branches off to the north, winding its way inland until it reaches Glen Elchaig. A stunning Highland glen managed by the Inverinate Estate and a ‘through route’ to the east coast in days gone by. It’s here you’ll discover the Falls of Glomach, one of the most spectacular waterfalls in Britain. East of Eilean Donan Castle the waters become Loch Duich and where they end they lap the shores of mighty mountains, the Five Sisters of Kintail. This collection of sea lochs with their varying orientation enables the sea kayaker to find sheltered water when the open coast may be too challenging. Every option with a built-in spectacular backdrop! 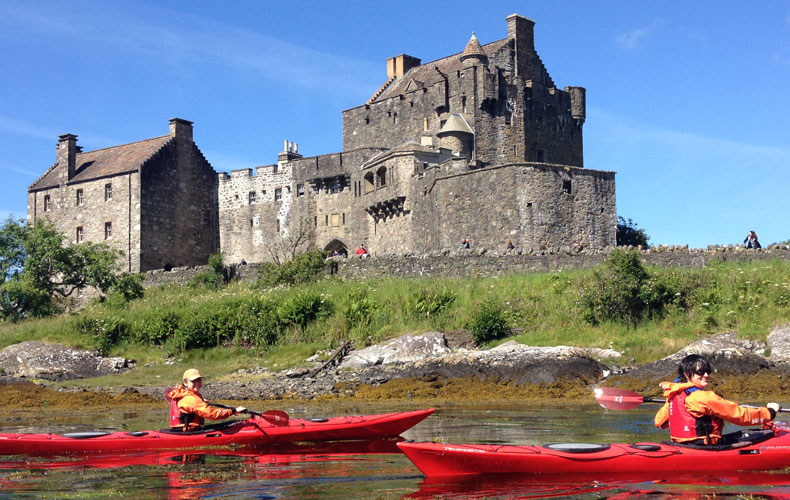 The slipway in the heart of Kyle of Lochalsh is a good place to launch or land your kayak whatever the state of the tide. From 1841 up until 1997 this was where the Skye Ferry operated, taking people and cars back and forth across Loch Alsh to Kyleakin. In fact, both villages grew substantially on the back of waiting passengers. In 1997 the elegant Skye Bridge was opened which transformed access between Lochalsh and Skye. But it came at a price – tolls were expensive. These have since been removed and visitors and residents can now travel freely between the two areas. Although a modern feature on the landscape, there is something very special about kayaking under the bridge’s enormous span and seeing the Cuillin ridge framed perfectly underneath. 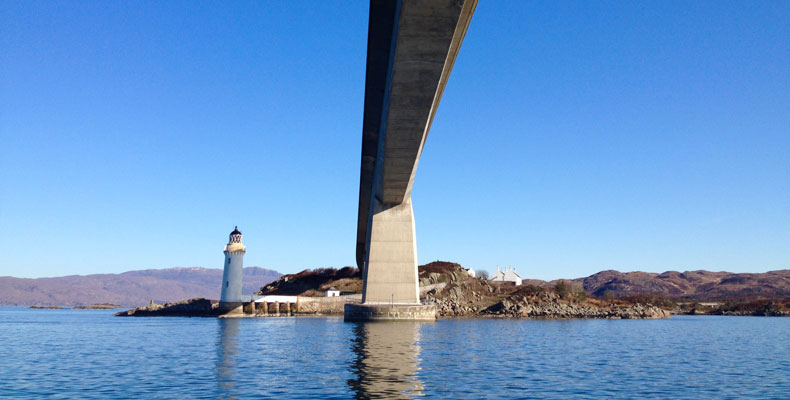 Leaving the shelter of Loch Alsh and heading north around the coast you pick your way between the many scattered islands and rocks. Depending on the state of the tide there are numerous tiny coral beaches nestled here, which provide magical locations for a break. Further along the coast more islands create sheltered channels, which are rich with marine life and the sea becomes turquoise blue in the sunshine. It’s a great place for spotting otters and herons and a sea kayak is the best mode of transport to explore. The bay of Port Cam sits under the grassy slope and fields at the crofting township of Drumbuie. The meadows here are home to a variety of orchids and other wild flowers and herbs, not dissimilar to Hebridean machair. 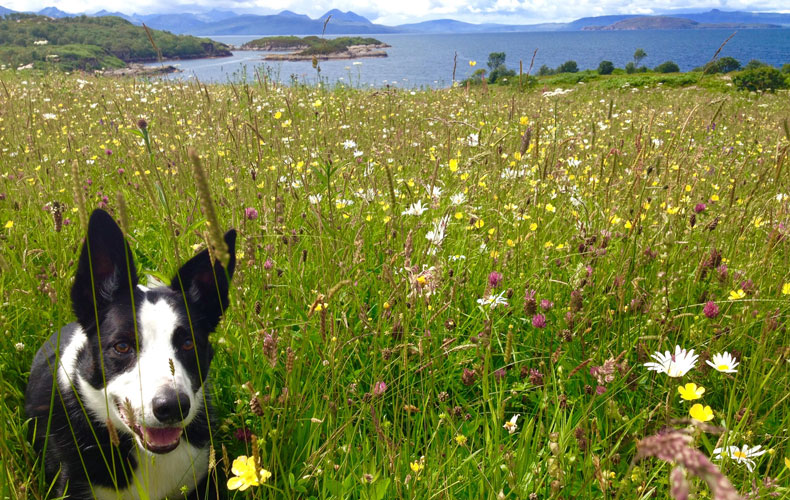 By contrast to Kyle of Lochalsh, Plockton is very tranquil (with the exception of ‘Regatta Saturday’!). This east-facing bay on the west coast of Scotland provides shelter and a superb mooring for yachts, all overlooked by the splendid Duncraig Castle. In the summer months, there are sailing races in action, seal watching trips, and creel boats returning with their catches of prawns and crabs. It’s a busy place for kayakers too and Sea Kayak Plockton is very at home there!