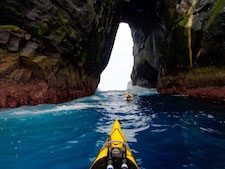 Alison recounts this summer’s tour to the wild beauty of St Kilda with kayaks, enjoying some perfect weather conditions for the expedition, helping to make memories and create a once in a lifetime opportunity for her lucky group of paddlers.
She also shares something of the legends of the Minch and its remote islands, The Blue Men and the fate of the St Kildans, forced to evacuate finally in 1930.

June, July and the early part of August have been spectacularly busy months. Four fully booked and successful Sea Kayak Skye expeditions enabled some happy paddlers to explore different corners of the island in a variety of weather and sea conditions. Our Summer Isles Expedition, lead by Scottish and UK “Adventurer of the Year” Will Copestake, took advantage of a spell of incredible high pressure, light winds and calm seas. It’s not often that the most important question is: “do we have enough sunscreen?” This is also the time of year when we cross to the Outer Hebrides for our annual expedition to St Kilda. 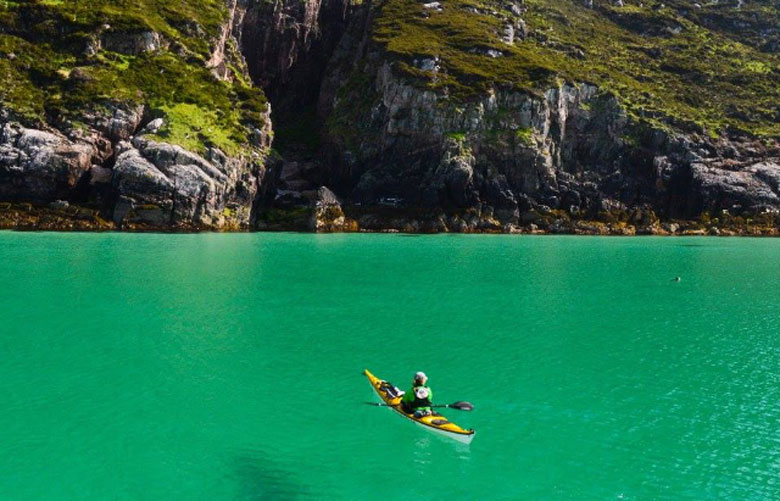 Skye is an incredible island in its own right, but is also significant in its stepping stone role as gateway from mainland Scotland to the Outer Hebrides. Uig, on Skye, is an important ferry departure point. For me, a ferry crossing, no matter how long or short, always feels like an adventure. I love and savour the excitement of waiting in the well-organised ferry queue at Uig. A chance to grab a coffee (and some bottles!) from the Isle of Skye brewery and anticipate crossing the Minch with a legendary Calmac fish‘n’chip supper. 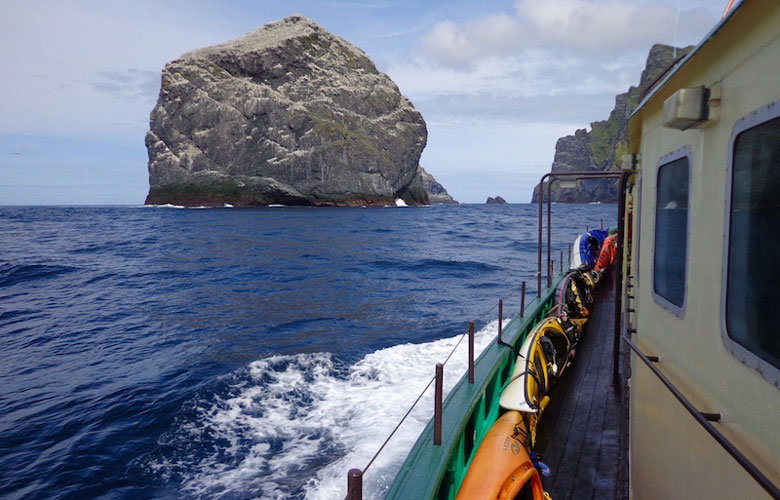 The Minch: that stretch of water that separates Skye from the Outer Hebrides and owner of its own slot in the inshore weather forecast. Tides funnel through it cre-ating strong currents. It’s a shipping lane too with a “separation zone”. South-bound ships skirt the Hebrides while northbound traffic hugs the Isle of Skye, passing through the relatively narrow channel between Fladda-Chùain and Rubha Hunish. The Minch, especially near the Shiant Islands, can be very rough. Legend has it that the mythical Blue Men of the Minch, also known as the Storm Kelpies, are said to occasionally prey on sailors as they make the crossing. While the Blue Men slept the weather would be fine, but they could conjure storms when they wished. Tucking into my fish supper I was content that they were sleeping. The crossing to Tarbert was glorious and I could now anticipate the next part of our journey … the passage to the archipelago of islands that make up St Kilda.

The links are strong between St Kilda and the Isle of Skye. St Kilda became part of the territory of Clan MacLeod at some point before 1549 and in later years was controlled from Dunvegan up until 1779. Although the MacLeods were forced to sell much of their estate to fend off bankruptcy, they bought back the archipelago in 1871 and it was not sold again until 1931, shortly after the evacuation. On reaching this cluster of islands and sea stacks, which lie 100 miles west of main-land Scotland and 40 miles west of the island of North Uist, I’m filled with awe that its people lived here for generations. The evacuation isn’t surprising: life had be-come almost impossible with healthcare being a particular issue as much as the difficulty in making a livelihood. What a privilege to spend a few days here as ‘tourists’ and get a taste of this dual World Heritage site. St Kilda is a sensory over-load: coastal architecture that would look at home in a film set, seabirds filling the skies and covering the ocean in rafts, the noise of tens of thousands of gannets call-ing, the smell of the guano pasted thickly over sheer cliffs and the relentless swell of the Atlantic crashing and surging through arches and over rocks. To kayak here is an even greater privilege as we get to experience parts of the island that perhaps only the St Kildan people witnessed as they scaled its remote cliffs, harvesting sea-birds and eggs to survive on. 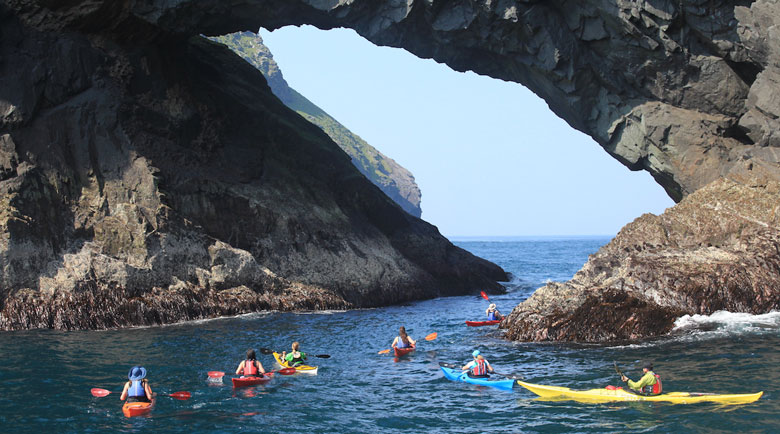 Our expedition this year was very special, a wonderful group of paddlers, glorious weather and the additional opportunity to kayak at the Monach Isles, Taransay and Scarp which sit to the west of the Hebrides. Next year we’re planning a new trip to the southern tip of the Outer Hebrides … I can’t wait!