The Island of Raasay makes a good day out. The ferry leaves from Sconser on Skye every 1 to 2 hours and takes 25mins. The walk starts at the ferry terminal on Raasay, the route explores a range of terrains including the beach, forest, ruins of a broch and then returns along the public road after visiting the village of Inverarish. 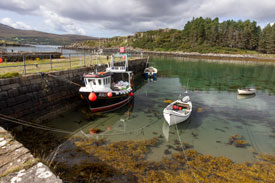 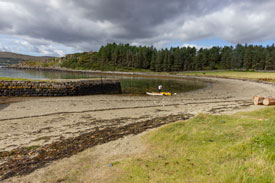 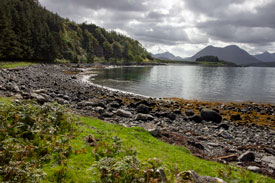 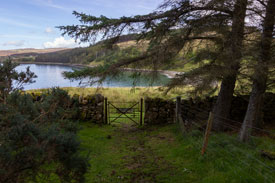 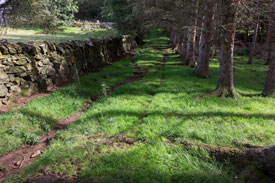 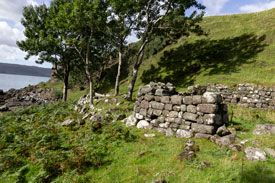 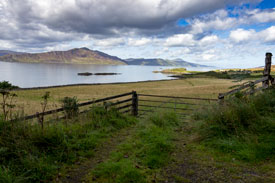 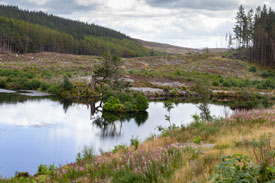 The Raasay ferry terminal is in Sconser on Skye which is 12miles from Portree. There is a public carpark at the terminal. The walk route starts at the ferry terminal on Raasay allowing you to cross to the Island on the ferry as a foot passenger for a nominal fee.

Around the harbour and the Inverarish area of Raasay there is a network of well-marked walking routes managed by the Scottish Forestry Commission. Each route has been given a colour. Our route is going to start following the ‘Blue’ route and join the ‘Red’ route for the second half of the walk. Full details of all routes have been published by the Forestry Commission as a leaflet.
Our selected route covers a total distance of 6.45km and will take around 1hr 50min to walk with no stops. The route is a loop that starts and finishes at the ferry terminal building. The walk is graded as Medium in difficulty. Generally the paths are solid but there are a couple of smaller sections which are either muddy or rough.

From the ferry terminal building follow a narrow road to the left side of the building. There is the sea wall on your left. This road leads to the old pier where there are some local boats. Pass the pier and cut left down on to the beach. Walk to the far end of the beach where you will come to a gate. If the tide is far in and the beach is covered, there is a grassy path just above the water line that leads to the same gate.

Pass through the metal gate and following the narrow path you will see the first marker post with an arrow and blue ring. There will be many posts like this along the route. Follow the path out to the small headland. It can be muddy in places with various rocks to step around.
The path cuts up on top of the headland offering great views out to sea (Sound of Raasay) or looking back down over the harbour and ferry terminal.
The grass path leads on passing large rhododendron bushes, you reach a fence. Don’t cross the fence. Instead turn left and duck under the bushes. It is a little muddy here. Now under the tall rhododendron bushes there is a 'tunnel' to follow.
After around 150m under the bushes the path open up and you will reach a metal gate.

Through the metal gate you will see a beach down the grassy bank. Follow the fence on your right along the top of the bank that overlooks the bay.
Another blue post marks where the path cuts down the bank to the shore. The path now follows the shoreline heading north with a mix of pine trees on your right. The narrow path is good underfoot with odd rocks to step around.
The path reaches some ruined stone buildings. Pass these ruins following the shore path which then turns around a small cliff face and climbs up on top of the headland. There are now fantastic views to the north.
The grass path is now a little vague but if you look inland you will see a stone wall. The next ‘blue’ post is by the wall near the pine trees.
Passing the post, follow the stone wall on your left-hand side. The path here is a bit muddy and rough with tree roots. The path leads up to a metal gate and the road.

Go though the gate and turn left on to the public road. Walk along the road for around 160m. On the right-hand side of the road look for a metal gate with a wooden sign labelled ‘Orchard Wood’.
Head through the gate and up the hill on a gravel path which lead past some large scots pine trees.
There are more posts now marked with a ‘blue’ ring that show the way.
The path turns to the right and levels out. There is now a field on your left. The path heads south and is relatively straight for about 500m. Eventually you reach a large stone wall which is maybe 2m in height. This is the old walled Orchard, rather an unusual thing on the west coast of Scotland. The path cuts around the Orchard wall which is maybe 100m long and links up to a driveway and out onto the public road.

Now on the public road you will reach a junction where there are some information boards that may be of interest. Continuing straight down the road. You will see a small loch (pond) on your left and a rack of stored kayaks that are used by Raasay House.
This part of the route is marked with posts that have both a blue and red rings around them.
Turn off the road and down a gravel path beside the kayaks where there is a small foot bridge to cross.

The gravel path heads uphill away from the loch with pine trees on your right-hand side. At the top of the hill the track turns to the right where there is a fork in the path and a signpost for to ‘Dun Caana’. Our route stays on the main track following the posts now with just one red ring around the top.
Follow the path for another 200m where there is a sign for ‘Dun Borodale Broch’.

Turning of the walking route there is a short path up to Dun Borodale Broch.
Broch’s are understood to be Pictish round towers and there are hundreds on the west coast of Scotland. Usually in line of sight from at least one other to allow signals to be passed.
This tower is in not the best of conditions but is still worth a look. Re-join the walking route.

Follow the path from the Broch down the hill to where there are some impressively large pine trees. The track cuts in front on the old Church Manse. The cottage with a large garden and, unusually, a tennis court.
Follow the driveway to the Church where there are some red posts confirming the way. Pass the white Church and you will see a narrow gravel footpath. The path drops downhill past a mix of birch trees and tall heather. After a couple of minutes walking the path drops down to meet the public road.

We will now follow the public road back to the ferry terminal. If you wish you can head down in to Inverarish where there is a shop or take the direct road back.
You will pass the new Isle of Raasay Distillery which is a distinctive building. We also pass the old farm buildings where the TV show ‘S.A.S. Who Dares Wins’ is shot. Finally, you pass Raasay House which is well worth stopping for some refreshments at their café. Our walk finishes back at the ferry terminal. 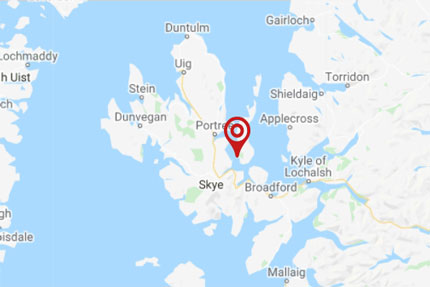 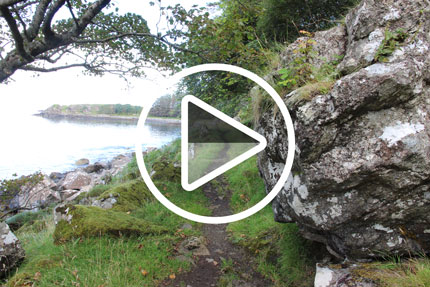